The Church is still firmly in Advent, but in St. Peter’s Square, Christmas has come a little early. The Vatican Christmas tree and nativity scene have already been unveiled, to rave reviews.

It wasn’t always this way, though! Traditionally, Italian nativity scenes are kept tightly under wraps until the evening of December 24. They are unveiled for the first time before Midnight Mass, when the priest lays the Infant Jesus in the manger. But until then, the nativity scenes in Italian parish churches generally look like this:

In recent years, however, Vatican City has been doing things a bit differently. The change occurred first in the Jubilee Year of Mercy, which officially began on December 8, 2015–because as part of the opening celebrations, both the tree and the nativity scene were opened to the public on that day. Ever since that year, the Vatican has succumbed to the temptation to unveil the nativity scene at about that time. 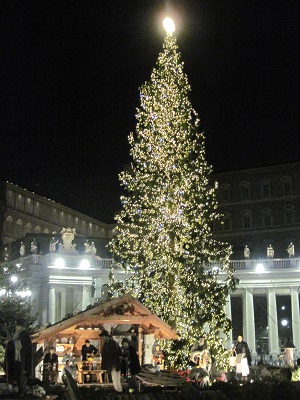 This year was no exception, so you can already stroll through St. Peter’s Square in the evening hours and see the lovely tree, which this year is lighted all in gold. It came all the way from Vicenza, in northern Italy.

The nativity scene, which of course still lacks the baby Jesus, is made of wood which also comes from northern Italy. More specifically, the wood is from trees from that region which fell in horrenous storms and flooding last year. It’s a sort of tribute to the Italians whose homes and farms were seriously damaged by that weather event.

You can watch a brief clip of the tree-lighting and nativity-unveiling here. But even better, you can come to Rome and see it all for yourself! What are you waiting for? 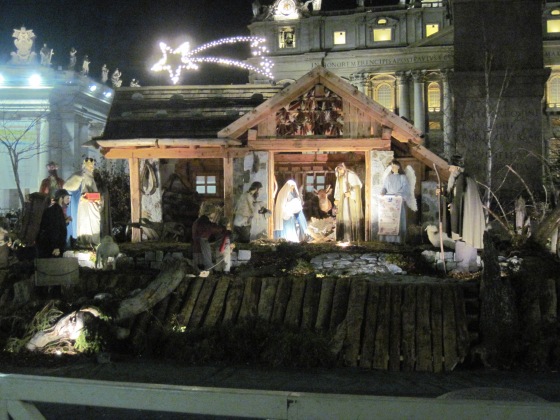