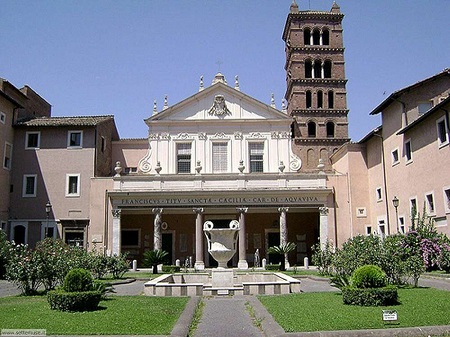 miss important patterns that have historical significance. The design of early Christian churches like Santa Cecilia (seen here) is a good example. Notice what these churches have in common, out in front of the main entrance?

In the first millennium or so of Christianity, before the eras of gothic stained glass and baroque gilding, churches generally had an open courtyard out in front, with a fountain in the center.

Originally, the fountain was probably just a pretty decoration, with a handy functional aspect to boot: you could always stop and fill your water jug on the way to/from Mass, for use at home in the kitchen, and of course you might take a drink too. Here’s San Clemente, where the fountain still gurgles invitingly during Rome’s blistering summer months. Below, you see the massive basilica of Saint Paul Outside the Walls, where the fountain was at some point replaced with a larger-than-life statue of the great Apostle to the Gentiles. 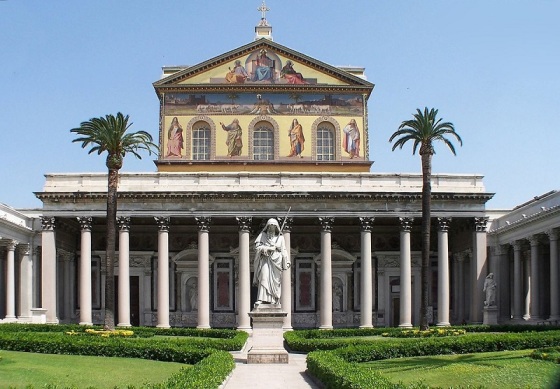 But as liturgists will tell you, at some point the fountain actually took on a liturgical significance of its own. In the liturgies of the first centuries of Christianity, it became an established part of the pre-Mass ritual that worshippers would stop at the fountain before entering the church, to wash their hands and ever-dusty feet. Asthetically, it’s always better to be clean when you show up at the house of God, of course; but over time the external washing became symbolic of an internal, spiritual purification. Christians would therefore stop at the fountain, not just because they wanted to look nice and clean when they came to Mass, but because washing in it signified a desire to purify oneself of one’s sins and imperfections. (Want to read more about this? We recommend the late great Josef Jungmann’s 2-volume Mass of the Roman Rite: Its Origins and Development.) 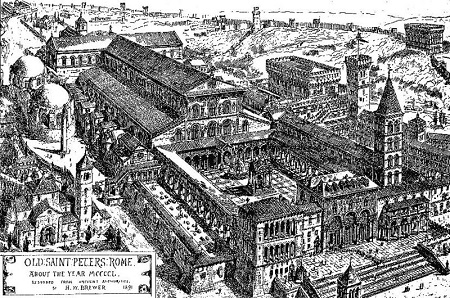 Renaissance, most of Rome’s churches were updated and the fountain-courtyards disappeared. In fact, the first Saint Peter’s Basilica had a marvellous-looking courtyard with a fountain; this was completely eliminated in the 16th-century rebuilding project, when the basilica’s size swelled to include much of the courtyard area. Here’s an old engraving (1450) with a bird’s-eye view of how it used to look.

As you can see here, there are a few churches left in Rome today where the old courtyard, with or without its fountain, still precedes the main doors of the church itself. Few people even notice their commonality, and they certainly don’t appreciate its original religious significance. (Hint: that’s why you want to tour Rome with a knowledgeable guide!) But if you understand the history behind the sites, they become all that much more unforgettable.