This year marks the 500th anniversary of the death of Leonardo da Vinci, and it has prompted some special exhibitions by those few museums lucky enough to have his works in their collections. Here in Rome, there’s only one painting by the great Leonardo, in the Vatican Museums; and for a limited time you can see it for free! 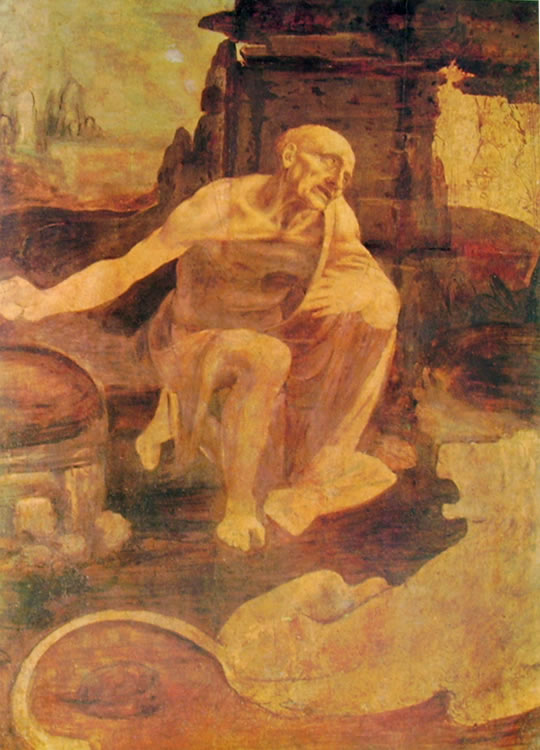 Nobody knows who commissioned da Vinci’s Saint Jerome; but as we can all see, the painting was never finished. In the early 1800’s it was owned by the Swiss painter Angelica Kauffmann–but at her death it went missing. Subsequently it was discovered by the uncle of Napoleon, Cardinal Fesch, in two parts: the head of Jerome had been cut out and was being used to cover the stool of the Cardinal’s shoe-maker, while the rest of the painting was found in a second-hand shop, where it was being used as the cover of a box! Fortunately Fesch was able to identify the separated parts of this priceless work for what they were, and the painting was pieced together again. In 1856, Pope Pius IX purchased it for the Vatican Museums, and it’s been here in Rome ever since.

Unlike many art-works depicting this great early Father of the Church–which show him translating the Bible into Latin, surrounded by books–da Vinci’s shows Jerome in the desert cave where he did penance for his (unknown) sins. St. Jerome is seen beating his breast with a rock, something which he is definitely known to have done. The lion, on the other hand, is an element of later medieval fiction; stories arose about a sickly lion who supposedly limped into the monastery where Jerome was living at the time, and the saint cured him with some herbal medicine–whereupon the lion insisted on remaining at the monastery with the monks as a sort of pet. In actual fact, this story is a complete fabrication … but painters nonetheless loved to depict Jerome with a docile lion at his feet.

Usually this lovely work of art hangs in a gallery of the Vatican Museums which nearly all tourists manage to miss (although we know exactly where it is, and will be happy to take you to see it!). But for the next couple of months, a special exhibition centering around this one painting is taking place right in the colonnade of St. Peter’s Square–for free! When the exhibition has ended here in Rome, da Vinci’s Saint Jerome will go on a world tour, first to New York City, and then on to the Louvre. Here‘s a video put together by the Vatican Museums for the occasion; if you watch the first half-minute or so, the angle of the lighting on the painting enables you to see the seams in the canvas around the square section containing Jerome’s head, traces of the past travesty that a French Cardinal, with a sharp eye for great art, managed to stop.