Whenever you’re talking or reading about the everyday lives of early Christians here in Rome, it’s important to keep in mind that there’s an awful lot that we just don’t know, and never will. We’d have to travel back in time and see them in person, in order to answer millions of questions about how they lived, the way they dressed, their occupations and social status, the ways that they interacted with each other and with non-Christians… the list goes on.

But there’s one thing about Romans in the first centuries of Christianity that we can be fairly sure of: we know how they used to pray. That’s because we have numerous images of Christians in prayer, carved by their Christian contemporaries for tombstones.

The pose you see here is known in Latin as orans, or “praying.” Whenever a person is found carved on a stone slab that was meant to cover a Christian tomb, he or she is always standing in exactly the same way, with arms raised. You’ll never find a picture of anyone praying with folded hands, as we have been doing for generations–that pose apparently developed in later centuries. 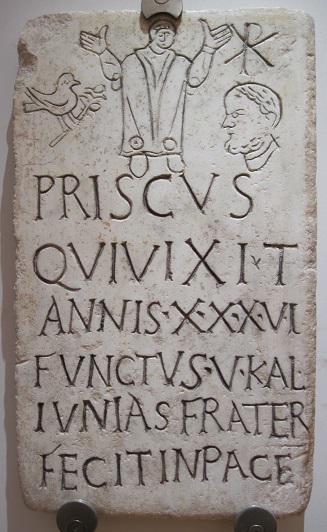 Sometimes the orans figure on a tombstone is accompanied by other Christian symbols, such as the Chi-rho or the dove. In these cases, the faith of the deceased person would be easily identifiable even without the image of the person in prayer. In this particular example, we also have a bit of personal info: this is from the tomb of Priscus, who died on May 28 of an unknown year, when he was 36 years old.

But we also know that the orans image was not used on pagan tombstones. This means that when a stone slab is found which contains no imagery except for a person holding his hands high in prayer, you can rest assured that whoever the person was, he was a Christian. Archaeologists here in Rome are rarely able to identify the individual buried in a particular ancient tomb; but they can often tell us what faith that person embraced. And in the grand scheme of things, that’s the most important information of all.