We don’t normally recommend that visitors take the “long” route through the Vatican Museums, since even the so-called “short” route is grueling enough! But if you’ve got the

stamina and the time, and you love crowds… you get to see the Raphael Rooms as a reward.

In the final room you can see the famous Fire in the Borgo, which was definitely based on a drawing of Raphael’s, but was probably completed by one or more of his assistants in about 1514. Unfortunately, by this point in the visit, most people are so physically exhausted, and so mentally numb to all the dazzling art around them, that about all they can manage to utter is, “are we almost to the Sistine Chapel yet?” And that’s a shame, because the complexity of this beautiful work merits a lot more attention than your average tourist can muster.

What’s going on here? Being a genius, Raphael managed to combine several different historical events in one scene. The theme, of course, is fire, but the events you see in the fresco actually took place in different parts of the world, many centuries apart.

In the center and to the right, you see a fire that raged through the Borgo neighborhood of Rome, just outside St. Peter’s, back in the 800’s. It is said that when Pope Leo IV came to the window of the basilica and made the sign of the cross in the direction of the blaze, it miraculously died out. If you don’t recognize St. Peter’s Basilica, that’s because the current one hadn’t been built yet! Raphael gives us a very rare depiction of the old St. Peter’s, which was being torn down and rebuilt right around the time that this fresco was being painted. 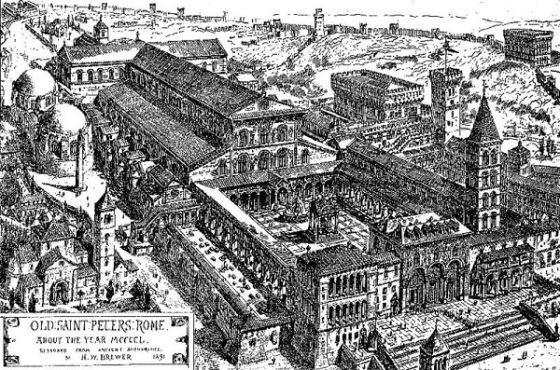 But on our left, we see an altogether different fire. When the Greeks invaded the ancient city of Troy–with the help of the Trojan Horse–they set random fires throughout the city so as to confuse and panic the populace. Only a handful of Trojans escaped, and as Vergil tells us in his Aeneid, they eventually make it to the Italian peninsula and found the city of Rome.

Their leader, of course, was Aeneas–and you can see him here, just as Vergil described him: carrying his elderly father on his back, with his wife and young son at his side, he is the model son, husband and father. No wonder that Julius Caesar chose to claim (without any hard evidence, though) to be descended from Aeneas!

What prompted Raphael to choose this theme for the main wall of this room? Well, at this point his patron was Pope Leo X, and so various historical scenes of different Popes named Leo can be found throughout the Raphael Rooms. So there was nothing random at all about Raphael’s decision to include the well known incident regarding the fire; and tying it into the fire at the downfall of ancient Troy was an element of artistic creativity.

There’s a lot going on in this fresco! But if you’re one of those exhausted, overwhelmed visitors who’s just counting the minutes to the Sistine Chapel, you’re going to miss it all…