Classical-music lovers are all familiar with the oratorio, a musical presentation that is partly a concert, and partly an operatic performance. Few people realize, however, that this genre had its origins here in Rome, among the Priests of the Oratory (a.k.a. Oratorians). Their founder, St. Philip Neri, popularized the practice of combining the reading of spiritual texts with musical performances, as a means of evangelizing the 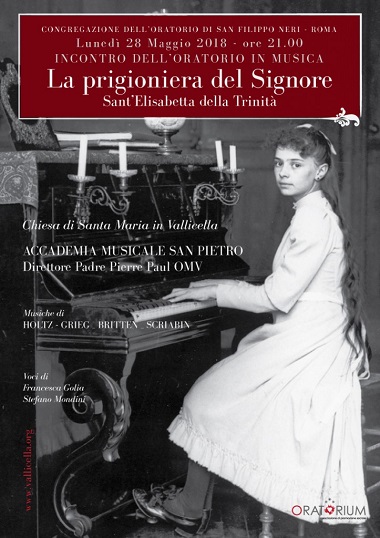 And the Oratorians continue to present these oratorios even today, right in the church where their religious institute began, and which now houses the tomb of their beloved founder. Last night saw a production called “The Prisoner of the Lord,” presenting the life of the recently canonized Carmelite sister, Saint Elizabeth of the Trinity (1880-1906). The life of this French pianist-turned-mystic was recounted in sections, alternating with readings from her letters and other writings, and pieces of classical music presented by the Accademia Musicale San Pietro, a small string ensemble whose sound was beautifully amplified by the baroque church in which they performed.

At the end of the evening–which began and ended with a prayer by one of the Oratorians–everyone had a sound understanding and appreciation of the love-filled life of suffering that brought St. Elizabeth ever closer to God. Her attempts to keep constantly in mind the presence of God, right here and now, while she was going about her daily duties, are a model for a sound spiritual life. And the music of Dvorak, Respighi and Janacek (among others) was sheer bliss. Spirituality and beautiful music–how can you possibly go wrong?