As everybody knows, there’s some first-rate art here in Rome. Some is located in the churches for which it was originally created, and the rest is found in the many museums located all over the city. As scholars, we tend to know where the art that’s worth seeing can be found.

That’s why this sign gave us pause.  It hangs in a parish church which in centuries past was established for the people 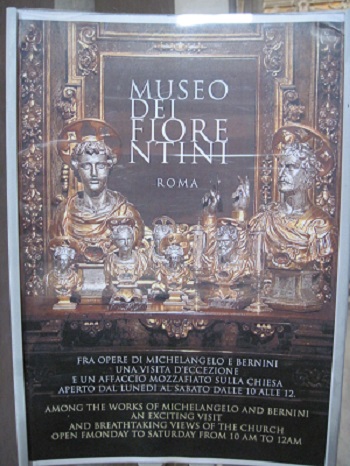 of Florence, which was a different nation at the time. What “works of Michelangelo and Bernini” have they got in there, and why don’t we know about them?  We asked around, and none of our fellow-professors had any idea what this museum was all about. So we decided to visit and check it out ourselves.

The opening-hours are very restricted, so we were careful to show up on time. Up a staircase inside the church (which we found only with the sacristan’s help), we found a door marked “museo,” which was locked even though the museum was supposedly open. Through the glass we could see some old gilded candlesticks and an empty gold picture-frame, of the sort that can be found by the boat-load in the dusty closets and sacristies of the churches of Rome.

We knocked, and rang the bell, and knocked again. Not a soul was around, so we started to leave. When we were almost out the church door, an elderly woman came up to us. She worked at the parish (or something), and evidently she’d seen us come down that staircase. We explained we had wanted to visit the museum.

“Where are you from?” she wanted to know. We stared at her in confusion. “WHERE? ARE? YOU? FROM?” she said, this time painfully in English.

Q: Why on earth would she ask such a question? If you want to visit a museum and it’s closed when it’s supposed to be open, what difference does it make where you’re from?

A: She asked, because she was willing to try to help us out, if we were Italians. But if she decided that we were just “stupid foreign tourists,” she couldn’t be bothered. This “us versus them” mentality is unfortunately not uncommon, particularly among older Romans.

To make a long story short, we never managed to get into the museum… but we’re fairly sure we didn’t miss anything.

It’s ironic that just a few blocks away, the Vatican is home to some of the finest work of Michelangelo and Bernini on the planet! It’s also open when it’s supposed to be open–and nobody rudely asks you whether you’re “one of us” or “one of them,” either. We routinely recommend to our clients the sites worth seeing. But this time, we’ve got a recommendation for a site that’s definitely worth missing.