Happy feast-day of Saint Pius V! If you’re not familiar with this great man’s many achievements, you’re in for a surprise. Pius V reigned in the late 1500’s, when the Reformation had already ripped the Church into shreds–and on top of that, he single-handedly saved the Western World from muslim domination. Pretty good for a simple Dominican, wouldn’t you say? 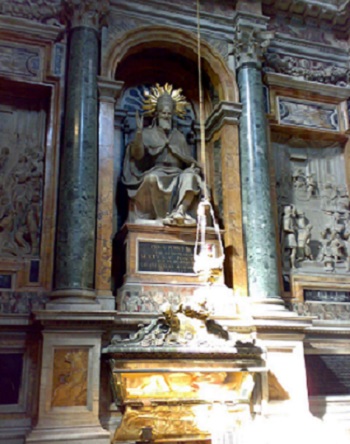 After electing to the papacy one spoiled rich kid after another for generations, the cardinals that met in conclave in 1566 realized that things had to change, and fast. As a Dominican, the new Pope had lived a life of true poverty, walking everywhere on foot and shunning the glitterati-lifestyle of too many Italian cardinals of his day and age. Many assumed that when he assumed the papacy, he would change and become corrupt like all the rest.

But they were quickly proven wrong. Pius V gets the credit for the massive reforms undertaken by the Church at the Council of Trent. He excommunicated Queen Elizabeth I, in an unsuccessful attempt to force her to return to the Catholic Church, and bring the rest of England with her. Pius wasn’t cowed by anybody, no matter how powerful, rich and important they might be. He based his decisions not on who you were… but on what you did. BIG DIFFERENCE.

While western European countries were fighting over theological issues, the muslim Turks had already begun invading the continent from the East. They had seized parts of Hungary, Austria, and Poland–but the rest of Europe didn’t seem to be paying them much attention. Pius V realized that the Turks wanted it all, and he frantically pressured European royals to cooperate with him in forming a united Christian force against the infidels.

But the Spanish wouldn’t cooperate if their enemies the French did, and the English wouldn’t collaborate with the Catholics on anything, and it was one childish squabble after another… while the Turks continued their westward march, murdering men and enslaving their wives and daughters in their harems. Thousands of Catholic women spent the rest of their lives as sex-slaves in the Middle East as a result of the Turkish military successes.

Pius V frantically managed to pull together a force, consisting mostly of his own troops, 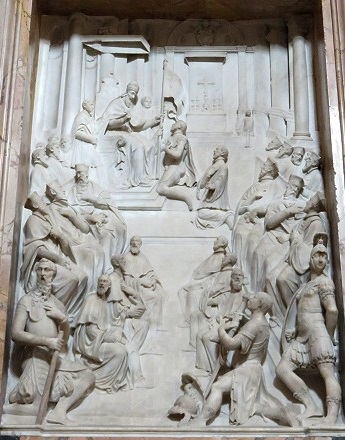 and those of the staunchly Catholic Holy Roman Emperor. He put it under the command of 24-year-old Don Juan of Austria, the illegitimate son of the Hapsburg Emperor Charles V. In 1571 the Christian fleet met the Turks at the Battle of Lepanto, the largest naval battle in modern history–and won a decisive victory. The few Turkish ships that were not destroyed limped back home in defeat, never to return. (In this marble relief, Don Juan kneels before Pius V here in Rome, formally announcing his victory at Lepanto.)

It’s not an exaggeration to say that Pope Pius V saved Western civilization! His rare combination of personal holiness and administrative savvy combined to make him one of the greatest Popes ever. It’s no surprise that he was canonized a saint; but what did surprise everyone was the discovery, when his body was exhumed, that it was incorrupt. Though not officially 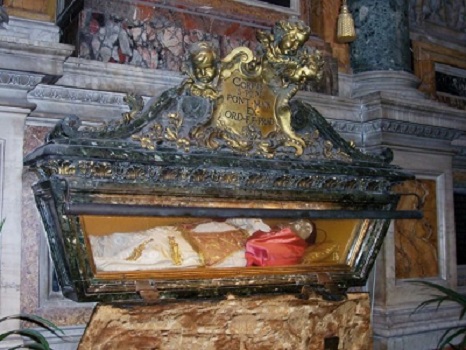 declared a “miracle,” it’s generally accepted that God chose in this way to show the world what He thinks of Pope Pius–and His is the only opinion Pius would have cared about anyway!

As you can see, Pius V has a marvelous monument above his tomb, which is sometimes open so that you can see his incorrupt remains. But there are no signs, and most tourists and pilgrims are so overwhelmed with the grandeur of the major basilica where he is interred, that they totally miss him! We often take visitors to the major basilica where Pius V is buried, and we’ll always point out his tomb and tell the story of this marvellous saint.